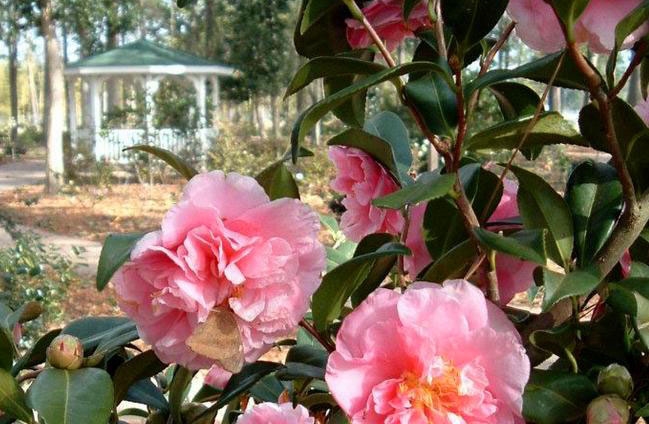 About the Gardens
The Coastal Georgia Botanical Gardens at the Historic Bamboo Farm will provide education, public outreach, and applied research in horticultural and environmental sciences.

Prior to the Civil War, rice plantations occurred in this part of Chatham County, Georgia, near the Great Ogeechee and Little Ogeechee Rivers. One of the large plantations was named Villambrosa and was likely owned by Cuban-born Andreas E. Moynello. Just to the south of Villambrosa was a modest 46-acre farm owned by the Smiths. Around 1890, Mrs. Smith acquired three clumps of Japanese timber bamboo from neighbor Mr. Moynello, who got his bamboo from a trip to Japan. She had them planted just to the south of her farmhouse along Ogeechee Road, in an area called Burroughs Station, southwest of Savannah.

Dayton and Bisset successfully got Fairchild interested in the "rare and potentially valuable planting of bamboo in Savannah." Fairchild then contacted a wealthy benefactor named Barbour Lathrop, who purchased the bamboo grove and the adjacent 46-acre farm from Mrs. H.L. Miller. The cost for this land was $5,000 in 1919. Lathrop then leased the property back to David Fairchild and the USDA for $1.

For 60 years the USDA used the Savannah station for researching potential economically important agricultural plants for the Southeast, as well as plant products. Various hardwood trees as well as bamboo species were planted from seeds or rhizomes sent from eastern Asia. In the 1940s, paper-making experiments were conducted. Although high-quality tissue and writing paper products were made from bamboo pulp, the endeavor didn't prove to be a profitable venture. Also during this decade, industrialists Harvey Firestone and Henry Ford cooperated with research on finding native plants that could be a source for latex. Fields of goldenrod were grown at the station, which locals affectionately named "the Bamboo Farm." The invention of synthetic rubber in 1955 led to the end of the goldenrod research project.

Evaluations on yucca, bamboo and plum yew for potential cancer-fighting abilities occurred mid-century. Kanaf, a tropical grass, and water chestnut trees were planted, but neither proved viable options for farmers in the southeastern coastal plain. By 1975, the USDA began phasing out all research functions of the Bamboo Farm. In 1979, government cost-cutting measures led to the facility's closure.

The Bamboo Farm was deeded to the University of Georgia in 1983 for use as an education and research center. Numerous ornamental plant and pest-management research occurred on site. By the mid-1990s, the University formed an advisory committee and began an aggressive capital campaign for improvements. Today, a Master Plan guides current development of a regional botanical garden, along with support from the 501 (c)3 non-profit organization, "Friends of the Coastal Gardens." In 2012, the Bamboo Farm and Coastal Gardens became the Coastal Georgia Botanical Gardens.

Judge Arthur Solomon Camellia Trail
Sasanqua, snow, vernal and common camellias and their hybrids fill this wooded garden, began in 2002 in partnership with the Southeastern Camellia Society. Peak flowering occurs from October to March. It is one of the most diverse and unique collections of species camellias in North America.