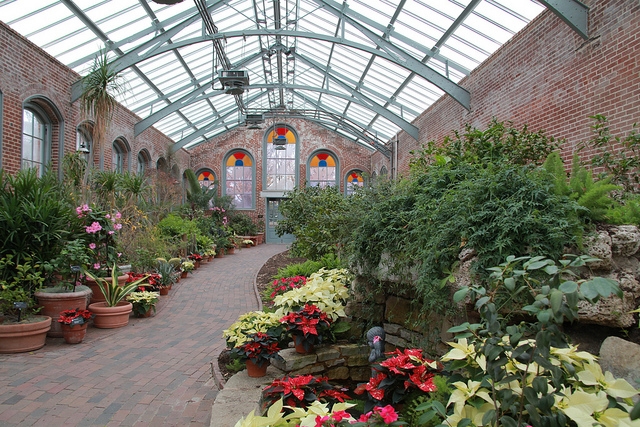 The Missouri Botanical Garden houses the majority of its camellia collection in the Linnaean House.  The Linnaean House, built during Henry Shaw’s lifetime, in 1882, is the longest continually operating greenhouse west of the Mississippi River.

About the Camellia Collection
Total number of camellia plants:   63
Number of distinct camellia cultivars or species: 47

The Missouri Botanical Garden collection includes several Camellia varieties, many from the most commonly grown species, Camellia japonica, which comprises thousands of cultivated varieties.  The blooms of C. japonica are most often white, delicate or vibrant pink or dark red, while different species within the genus bring in novel colors such as the yellow flowers of C. chrysanthoides.  Variation in the species C. japonica comes at the cultivar level: ‘Debutante’ has large, light pink peony-style blooms, while ‘Nobilissima’ has large, white semi-double blooms.  The collection includes species samples such as C. rosiflora, which has a low shrub habit and a delicate fragrance; and C. petelotii, which is native to the dense forests in southern China and Vietnam.

Additional camellias were planted in 2007 at the Garden’s Kemper Center for Home Gardening and within the Woodland Garden. The cultivars ‘April Snow’, ‘April Tryst’, ‘April Dawn’, and ‘Spring’s Promise’ are semi-hardy and are being tested for winter-hardiness in the St. Louis region.

The camellia flower has its beginnings in mid-summer, when the new buds begin to form deep in the terminal meristems. Pruning and shaping are done before the buds form, and the plants are mulched but not fertilized.  The flowers, which require a chill period, open between October and April, depending on the species. Our earliest camellias start to open in late December with peak bloom the month of February. Valentine’s Day is always a good time to come.  By late March, blooming finishes indoors.

The outdoor camellias in our trials are expected to bloom in April but sporadic flowers can occur later in the year as well.  In St. Louis, a camellia holds a special place in the hearts of avid gardeners and casual passers-by alike. A welcome respite, our camellias start to bloom in the depths of winter.