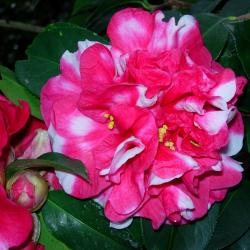 A natural "bowl" in the San Rafael hills provides a secluded setting for Descanso Gardens. The first inhabitants of the area were the Los Angeles basin's Gabrielino Indians. They relied on the native oaks for the mainstay of their diet, pounding acorns into meal for mush and bread.

In 1769, the Spanish explorer Gaspar de Portola arrived in San Diego and traveled northward along the route now known as El Camino Real ("The King's Highway"). He claimed the area which includes Descanso Gardens for the King of Spain. Governor Fages in turn deeded the site as part of a vast rancho--over 36,000 acres--to Corporal José Maria Verdugo in 1784, probably as a reward for loyal service.

Verdugo died in 1831, and his estate was divided between his son Julio and his daughter Catalina. The property remained in the Verdugo family until 1869.

Its sale marked the beginning of a long series of transactions that involved buying, selling, and subdividing thousands of acres of land.

However the 150 acres that form Descanso Gardens today, had never been developed when E. Manchester Boddy, publisher of the Los Angeles Daily News, purchased them in 1937.

Boddy cleared the land and built an elegant two-story mansion of 22 rooms, designed by architect J. E. Dolena of Beverly Hills. This mansion overlooks 25 acres of live oak forest and a camellia-lined driveway. Boddy named his estate "Rancho del Descanso," which means "ranch of rest" in Spanish. He also purchased an additional 440 acres north of the original property, whose mountain streams provide fresh spring water for the Gardens today.

About the Camellia Collection
Total number of camellia plants:   15,000-30,000
Number of distinct camellia cultivars or species: 700+

Before the area was opened to the public as Descanso Gardens, the land was an oak forest. In the late 1930s and 1940s, when newspaper publisher E. Manchester Boddy was building his estate called Rancho del Descanso, he planted thousands of camellias in the shade of the oaks to provide blossoms for the cut-flower industry. Those camellias, and others added in later years, continue to thrive.

Today Descanso Gardens is home to North America’s largest camellia collection. The Camellia Collection boasts rare and familiar camellias and has been designated an International Camellia Garden of Excellence by the International Camellia Society. Camellias at Descanso bloom from early autumn to spring, with the most dazzling floral display in winter, from January through February.