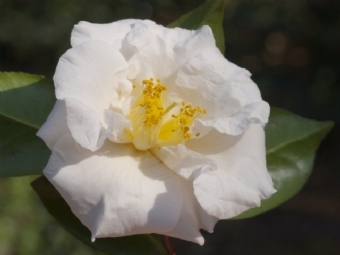 This C. japonica is believed to have been imported from Japan circa 1900. The original plant is reported to have been in the garden of a Mrs. Jaffe in Tukwila, Washington.

Bloom: The large white semi-double has a pink cast and long, yellow stamens.

It is also known as 'Auburn White', referring to the City of Auburn, Washington, 22 miles south of Tukwila, Washington. It was listed in the Portland Camellia Nursery Cataloge, 1946-1947.

The Southern California Camellia Society Camellia Nomenclature credits H. H. Harms of Portland, Oregon as the originator with a date of 1949.