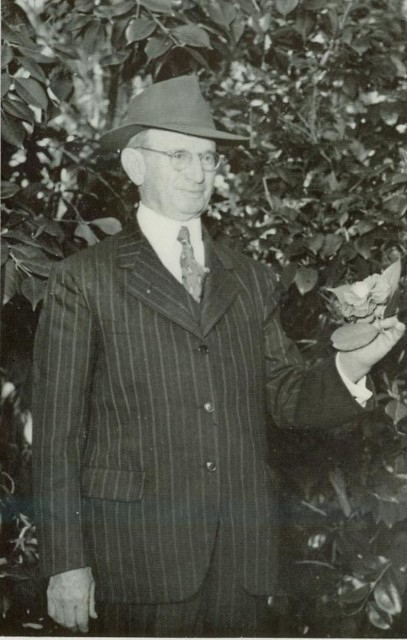 Judge Solomon was one of the founding fathers of the American Camellia Society and played an instrumental role in its early development.  His many contributions to ACS included serving as its second president.  As the camellia societies of today struggle with the challenges of attracting interest in camellias, maybe, we should look back and examine one of ACS’s primary architects.  He was a man who loved challenges, and he was someone who dared to dream of goals that others thought were impossible to achieve.

Judge Solomon was born in Savannah in 1873.  He was one of nine children of Henry and Sarah Alexander Solomon.  After completing school is Savannah, he went to Atlanta where he graduated in the first class of Georgia Tech.  After graduation, he returned to his native Savannah, where he began working for the National Cash Register Company.  Sometime around 1905, Judge Solomon purchased the E&W Laundry.  Throughout his career in the laundry business, the Judge is credited with various innovations on the newly created “washing machine”, but his greatest accomplishment occurred in the area of public service.  The question that always arises when talking about him is “What kind of judge was he?”  The answer is that he really was not a judge at all.  The title “Judge” was an honorary designation for county commissioners in Savannah years ago.  On July 14, 1914, Arthur W. Solomon was appointed to the Chatham County Commissioners, and thus became forever remembered as Judge Solomon.  He would remain a county commissioner until retiring in 1960 after 46 years of public service.

As a young boy, the Judge learned an appreciation of flowers and horticulture from his mother.  She was born in England, and she used to tell him about the beautiful gardens and lovely surrounding countrysides of London.  This inspired his interest in horticulture. In 1905, Judge Solomon bought 22 acres of property on Grimbal’s Point, where he later established his home, Wellesly Manor, and his gardens that would later be well known throughout the camellia world.

In the very first American Camellia Society yearbook (1946), there is an article written by Judge Solomon entitled “The Trials and Tribulations of a Collector”.  It is an autobiographical account of how difficult it was to procure camellias at the time when the Judge was planting his gardens.  Camellia nurseries in the United States were growing limited varieties, and to get the plants that he wanted, the Judge went all the way to France.  To make matters worse, there was no such thing as UPS at that time.  To get the plants all the way across the Atlantic Ocean and to Wellesly Manor would be a feat in itself.  In June of 1937, Judge Solomon traveled to France where he selected 200 plants of various varieties of camellias that he wanted.  He arranged for those plants to be shipped to Cherbourg in August of that same year. He met them aboard the ocean liner Queen Mary.  All of these plants, in their muddy French soil, were loaded into the hold of the ship where it became Judge Solomon’s unenviable task of unpacking them and washing all of the French soil off the plants roots before the ship reached the three-mile limit of the United States territory.  For two and a half days, the Judge and a handful of seamen washed the dirt off each plant and carefully packed its roots in peat moss.  In the article, he stated that his wife did not like the idea of him passing through the ship in borrowed, ill fitting, dirty overalls, but he quoted “a camellia fancier will do almost anything, wife or no wife”.  After all of the difficulty that he endured, only about 40 of the 200 plants survived, but the Judge still considered all his efforts to have been worthwhile.

As much as Judge Solomon did for the American Camellia Society, he did even more for the city of Savannah and Chatham County.  As mentioned earlier, Judge Solomon was not a “Judge”; instead he was a county commissioner for forty-six years.  It was his public service that he is most remembered and revered for in Savannah.  The Judge made it his own personal project to plant trees and shrubs along the roads and highways around Savannah so that all of its citizens could enjoy them as they passed back and forth each day.  He propagated azaleas, oleanders, and camellias at a nursery on the county’s land, and transplanted them throughout the city.  He dug small live oaks and palms off of county land or from land belonging to his friends, and installed them along the roads and highways.  He instituted programs to have azaleas and camellias planted in the parks and squares of Savannah.  Today, as you travel through our beautiful and historic city, the results of Judge Solomon’s efforts are still visibly apparent.  The small transplanted oaks are now large and graceful.  The ornamental cuttings have grown into spectacular plants that provide Savannah’s citizens and visitors with excitement when they come into bloom.  As we enjoy these priceless treasures today, we have to realize that they resulted from one man’s vision, and his constant devotion to see it become a reality.

Judge Solomon was someone who enjoyed sharing with others the things that made him happy.  Every year, he used to open up his beautiful gardens to the public when his azaleas and camellias were blooming.  He would spend countless hours talking to people and giving of himself, sharing plants, cuttings, and blooms with anyone who was interested.

As the next generation of camellia growers discovers the legacy of Judge Solomon, the most important idea is to learn form his example. Judge Solomon was a man of integrity and honesty.  He was a man who refused to accept mediocrity as a part of his life.  He was a man who set the highest standards and would never consider failure to be an option.  He was a man who was not afraid to consider the impossible, and he was someone who was committed to sharing his treasures with everyone.  Because of his own beautiful gardens, he had no need to plant azaleas and camellias in the public parks for his own benefit, and he did not hesitate to plant trees that he would never be able to sit under and personally enjoy.  He did all of this wonderful public service so that the next generations would have the same opportunities that he had.  As our camellia societies of today struggle with the constant difficulties of attracting people to our efforts, maybe we should simply look at the accomplishments of one our outstanding forefathers.  Like the Judge, maybe, we too, should begin looking for ways to give to the community.  Creating a noticeable public interest is the first step to attracting members to our societies.  If we commit ourselves to that cause, I believe that the Judge would be proud, and would applaud our success.