About the Garden
In 1970, the City of Aiken, South Carolina, acquired the 14-acre garden “Hopelands” from the estate of Hope Goddard Iselin. The City contracted to design a garden that would follow the wishes of Iselin “to perpetuate a garden of outstanding excellence, providing a quiet peaceful haven.” Today, Hopelands Gardens continues the wishes of Iselin, and pays respect to her involvement in horticulture and conservation. The camellia species garden, a collection of rare trees, shrubs, and other plants ideally suited to the southeast, comprise a portion of the Aiken City Wide Arboretum, which includes everything within a four-mile radius of the downtown. A number of the camellias found in Hopelands Gardens, such as ‘Herme’ (Left), are original to Hope Iselin’s the initial garden design.
On May 6, 1894, The New York Times announced the engagement of Edith Hope Goddard to Charles Oliver Iselin. In 1897, they purchased 14 acres of the Charles Burkhalter farm for $1,650. They named it Hopelands. The Aiken climate would allow the Iselins to enjoy equestrian pursuits amongst friends from the north, who had made Aiken into a fashionable winter retreat for the wealthy of the time period.
It was the golden age of American gardens and Hopelands typified the “country estate” esthetic—a motor court, a loggia overlooking formal gardens, a natural sweeping expanse beyond, as well as attractive, well-sited farm buildings. While visitors can see faint traces of the original design at Hopelands Gardens, the best supporting record of its original style was a result of Iselin’s involvement in the Garden Club of America. Shortly after the formation of the Garden Club of America in 1913, they encouraged club members to photograph their gardens and other noteworthy American gardens to create a slide library. The slides were then hand colored by artists, many who never saw the gardens. This outstanding photographic collection is now maintained at the Smithsonian Institute in Washington, D.C. The collection provides excellent historic documentation of early American gardens.
When Iselin died in Aiken, South Carolina, at the age of 102, the executors of her estate worked with the City of Aiken to transfer the Hopelands property to the City. The City of Aiken hired Robert Marvin, a well-respected landscape architect from Walterboro, South Carolina, to redesign Hopelands for its new life as a public garden. Marvin is considered to be the father of southern landscape architecture and maintains a place in the South Carolina Hall of Fame. He spent numerous weeks in Aiken prior to beginning work on Hopelands to gain an understanding of what was important to the community and to develop a sense of how it should feel. Marvin felt a sensitivity to the natural environment of the southeast was important in all of his designs.
Not long after work began to create Hopelands Gardens, the Aiken Camellia Society contributed to the garden’s redesign. The area behind the Iselin’s former stable is now an open green space with an expansive perimeter of camellias. Aiken Camellia Society club members propagated and planted an abundant collection which includes ‘Betty Sheffield’, ‘Coed’, ‘Professor Charles S. Sargent’ and ‘Tri-Color’, to name a few. The stable now houses the Aiken Thoroughbred Racing Hall of Fame and Museum, offering visitors an extensive history of the city’s racing industry. It also pays homage to thoroughbreds that hale from, or have been trained, in Aiken, South Carolina. (Left: ‘Betty Sheffield’and ‘Tri-Color’)
The numerous large camellias found alongside the deeply shaded brick pathways winding throughout the gardens and surrounding the former home site are original to the Iselin estate. In 1996, three women from the Aiken Garden Club Council saw the importance of memorializing camellias that had been cultivated and registered in Aiken County, South Carolina. They worked with John Weems, a local architect, to design a camellia garden encircling the courtyard of the Dollhouse, the playhouse that is now home to the Aiken Garden Club Council.
When planted, there were nineteen Aiken registered cultivars. The oldest registered camellia dates to the 1940s. It was registered by Dr. R. H. Wilds and was named for his wife, Eleanor. She was the daughter of Claudia Phelps, the founder of the Garden Club of South Carolina, whose estate, Rose Hill, is in Aiken. A number of camellias in the garden were registered by Lib Scott, an active local propagator. She named many camellias for well-known Aiken residents. (Left: The garden has a section dedicated to Aiken Camellia Cultivars collection.‘Dallas Pratt’ was registered by Mrs. William K. Laughlin in 1974. ‘Miss Aiken’  was registered by George M. Owens in 1975. ‘Jeffrey Webster’ was registered by Mrs. H. C. “Lib” Scott  in 1989.)
Two of the most notable horticultural features of Hopelands Gardens are an addition from Aiken, South Carolina’s own world-renowned plantsman, Bob McCartney, of Woodlanders Nursery. McCartney’s specialty is locating and cultivating rare and unusual plants that are particularly suited to the Southeast. He was instrumental in the development of the Aiken Citywide Arboretum, which is comprised of everything in a four-mile radius of downtown, and includes Hopelands Gardens. In the early 1980s, McCartney began the ongoing process of adding rare plants to Hopelands. Visitors to the garden can use their cellphone to dial the phone number on plant labels and learn about the specific plant.
In addition to the diverse varieties of the well-known C. sasanqua and C. japonica, there are many other lesser-known camellia species that grow wild in Asia. Most of these camellias have smaller blooms, different foliage, growth habits, and bloom times from the japonica and sasanqua species. An example is C. granthamiana, a rare, endangered species camellia, a single specimen of which was discovered in Hong Kong in 1955. The enormous bloom appears in October and resembles a sunny side up egg. 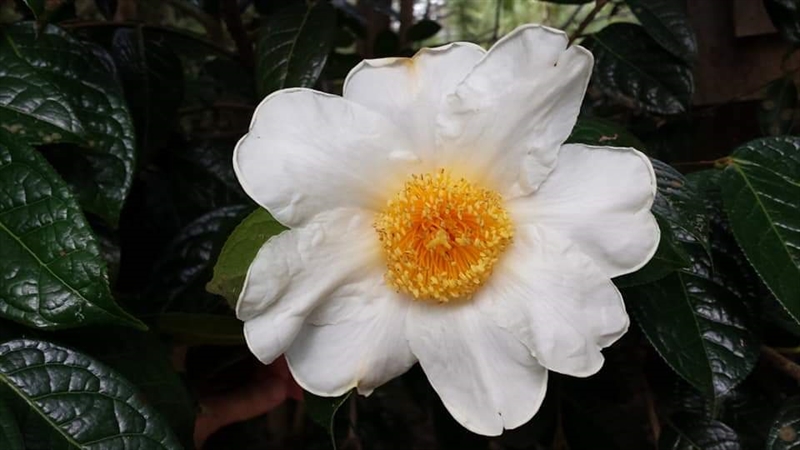 (Left: C. granthamiana)
C. lutchuensis is often called “mock orange camellia” for its delicate white flowers that are highly fragrant and appear mid-winter. C. nitidissima is a small tree with yellow flowers. Additionally, there are a number of C. sinensis shrubs, the variety from which southerners get their beloved iced tea, such as “Assam Tea.”  (Left: T C. lutchuensis photos and C. brevistyla)
Camellias belong to the Theaceae family. Within the garden are four other plants that also belong to the Theaceae family. The first is False Cleyera (Ternstroemia gymnanthera) recognized by many as the popular landscape shrub sold at nurseries under the name Cleyera, despite not being a true Cleyera. It does not produce showy flowers like the camellia genus, but its dark glossy foliage is quite lovely and often mistaken for a camellia. Other members of the Theaceae family located within Hopelands are the genera Stewartia, Gordonia and Schima. All three produce attractive, fragrant blossoms.
For those wishing to expand their familiarity with a diversity of plants well suited to the southeast, Hopelands Gardens is an excellent resource that allows visitors to see plants and trees tha 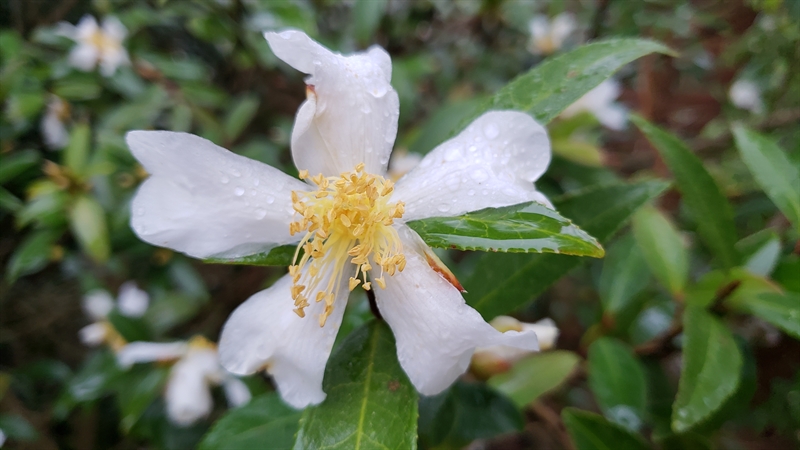 t they may not encounter elsewhere. A number of genus Magnolia shrubs are found in the Gardens, including Fogg’s banana shrub, a prolific early spring bloomer which produces lovely, creamy white blossoms which have an unpleasant fragrance. It is related to the better-known banana shrub of old southern gardens that produces yellow flowers and smells delightful. The hybrid 'Big Leaf Magnolia' is also represented. It is a hybrid of the 'Bigleaf Magnolia' and the 'Ashe Magnolia' created by the late Dr. Frederick Meyer of the U.S. National Arboretum. Though rarely seen in the United States, 'Kagonoki' (Actinodaphne lancifolia) and the 'Urajiro-Kankonoki' (Glochidion triandrum), both which are widely distributed in eastern Asia. They are rare in the United States but can be viewed, thriving here. Beyond delighting with a beautiful garden, Hopelands Gardens allows visitors to see plants and trees that they may not encounter elsewhere. The interesting and often rare plants and shrubs at Hopelands Gardens mix well with the robust collection of well-known southern favorites like tea olive, azalea, crepe myrtle, arching live oaks, and towering pines.
Hopelands Gardens is an amazing horticultural gem due to the work of McCartney, who has cultivated a rare and diverse plant collection. It has remained true to Hope Iselin’s wishes, while fulfilling Marvin’s design ethos—“We need to knock the walls down and let nature in again. Man needs to get out of his box that technology has created. He needs to wrap his arms around nature.” 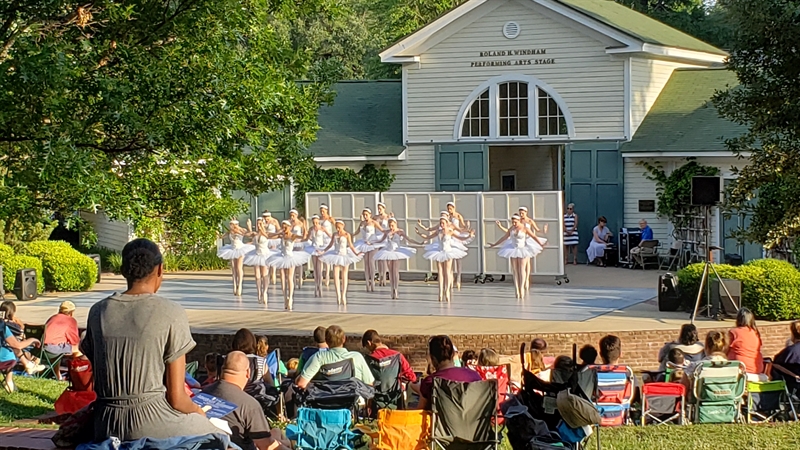