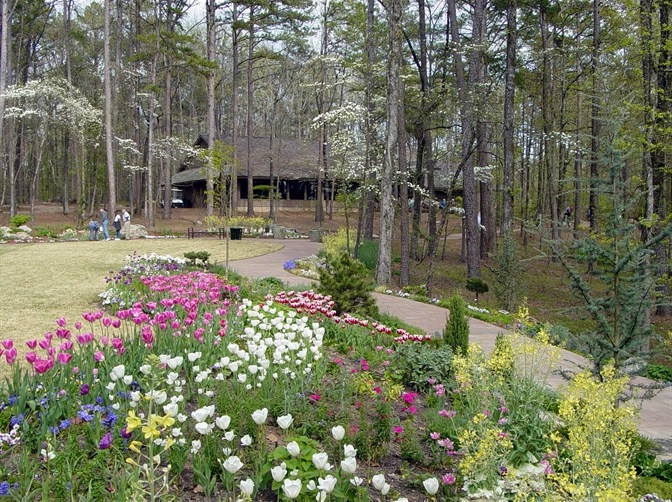 About the Gardens
Woodland Garden occupies a beautiful forested peninsula jutting one and a quarter miles into Lake Hamilton, Arkansas' most popular recreational lake.

The Botanical Gardens of the University of Arkansas System, they feature a 1/4 mile trail of camellias, large Asian garden with camellias, azaleas, and a large Japanese maple collection, Woodland Chapel and Pavilion by award winning architects E. Fay Jones and Maurice Jennings, English style mixed perennial border, Bonsai Collection, and over 3 miles of wooded trails through landscaping and natural areas.

Verna Cook Garvan, a long-time resident of southern Arkansas, was founder and benefactress of GarvanWoodland Gardens. The daughter of Arthur B and Louise Cook, she lived in Malvern (considered by many as the brick-making capitol of the world) as a child and later in South Carolina and Florida. She returned to Arkansas and married Francis Patrick Garvan, Jr., son of a prominent and affluent family from New York City.

The Garvans made Hot Springs their home and were involved in several businesses affiliated with ABCO (A. B. Cook) Industries, the most notable being Malvern Brick and Tile Company. Mrs. Garvan's father had operated Wisconsin-Arkansas Lumber Co. and the brick company before his premature death in 1934. Shortly afterward, she assumed control of the company's various holdings as one of the first female CEO's of a major southern manufacturing business and served in that capacity until her retirement in the 1970's.

The site for Garvan Woodland Gardens was purchased in the 1920's after a timber clear-cut in about 1915. Mrs. Garvan loved this beautiful place so much that she never allowed it to be cut again. In 1956, as a self-taught gardener, she began to develop it as a garden and possible future residence. She was intimately familiar with the land and laid out each path, marking every tree to be removed. Verna also personally chose each new plant and selected its location.

Over the next forty years, Mrs. Garvan planted thousands of specimens which now form an impressive collection. There are hundreds of rare shrubs and trees, some more than 40 years old, including camellias, magnolias and more than 160 different types of azaleas. In the center of the original plantings is the Garvan Pavilion, designed by nationally acclaimed architects E. Fay Jones (winner of the American Institute of Architects' prestigious Gold Medal and former Dean of the University of Arkansas School of Architecture) and his partner Maurice Jennings. Japanese maples and tree peonies serve as an introduction to the Japanese inspired Garden of the Pine Wind, just as Mrs. Garvan always intended. Rock gardens, a conifer border, and a growing number of bulbs and perennials complete the collection, providing interest throughout the year.

Upon her death in 1993, Mrs. Garvan bequeathed the property to the Department of Landscape Architecture through the University of Arkansas Foundation, a private, non-profit entity created to sustain university programs. Now an independent department of the University's Fay Jones School of Architecture, the Gardens continue to flourish and grow through the support of the Arkansas Legislature, Arkansas Natural and Cultural Resources Council, Arkansas Economic Development Commission, many generous private donors, and more than 3,500 members.

It was Mrs. Garvan's wish that the Gardens be used to educate and serve the people of Arkansas, providing them the joy and repose it had offered her. She noted the devastation of the environment that had taken place in her lifetime and wished to preserve a remnant of the twentieth century's natural grandeur for generations to come. The University hopes you will avail yourself of the opportunity to share her legacy.

Specialty: A department of the Fay Jones School of Architecture, University of Arkansas, the Gardens specialize in illustrating major design idioms from around the world adapted to a natural woodland setting. Major collections include camellias, azaleas, hydrangeas, and daffodils. Over 2,500 different ornamental plants are on display.

About the Camellia Collection
Total number of camellia plants:   100
Number of distinct camellia cultivars or species: 50