In the late 1940s, Thelma and Charles Mercer purchased a beautiful 14.5 acre tract of natural land along Cypress Creek. Thelma was an avid horticulturist, and she and Charles did much of the initial selective clearing to make space for some of her favorite native trees that included dogwoods, rusty black-haw viburnum, several species of hawthorns, plus many others. Thelma also planted large camellias that are still seen throughout the central gardens. She also introduced many other plant species, such as camphor, Ginkgo, Bauhinia, Philadelphus and tung oil that naturalized and are still growing beautifully.

When it came time for the Mercers to retire, they could not bear the thought of a developer bulldozing their “paradise.” So, in 1974, they convinced Harris County to purchase their original 14.5 acre tract with the stipulation that it would grow and be maintained as an educational and horticultural facility for the public’s enjoyment.

After Harris County purchased the land, a group of community gardeners interested in furthering the development of Mercer as a botanical facility formed the nonprofit group Mercer Arboretum Advisory Committee (MAAC). In 2000, the organization changed its name to The Mercer Society and members assist Mercer Arboretum & Botanic Gardens in its mission by organizing and implementing activities that encourage membership support, expand community awareness, and raise funds in support of Mercer’s strategic plan.

Since 1984, through donations and land purchases made by Precinct 4, Mercer has grown to more than 300 acres. The arboretum and botanic gardens are divided by Aldine Westfield Road. On the east side is the botanic gardens where over 20 acres of beautifully maintained gardens feature bamboo, color displays, daylilies, endangered species, ferns, gingers, herbs, tropicals, to name a few. The east side also has an extensive walking trail system, a Remembrance Walk for memorials and honorariums, ponds, a visitors’ center, courtyard plaza, plus much more.

The arboretum on the west side of Aldine Westfield features two playgrounds, a picnic area nestled in a woodland setting with 58 picnic tables, two barbecue pavilions, hickory bog, boardwalk, cypress swamp, maple collection and several miles of walking trails that wind through beautifully preserved woodlands. Mercer employs a team of experienced botanists, horticulturists, and gardeners who offer a wealth of knowledge and information, and will gladly assist you in anyway they can during your visit.

About the Camellia Collection
Total number of camellia plants:   41
Number of distinct camellia cultivars or species: 36

Storey Lake in May 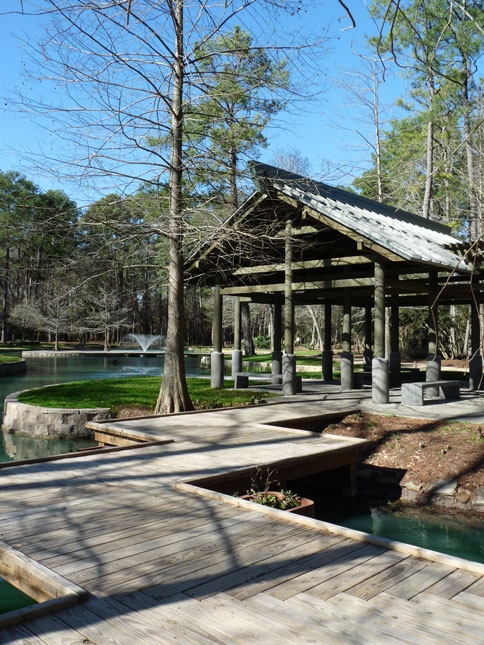