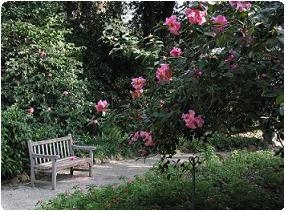 About the Garden
A private, nonprofit institution, The Huntington was founded in 1919 by Henry E. Huntington, an exceptional businessman who built a financial empire that included railroad companies, utilities, and real estate holdings in Southern California.

Huntington was also a man of vision – with a special interest in books, art, and gardens. During his lifetime, he amassed the core of one of the finest research libraries in the world, established a splendid art collection, and created an array of botanical gardens with plants from a geographic range spanning the globe. These three distinct facets of The Huntington are linked by a devotion to research, education, and beauty.

The Huntington is situated on 207 acres in San Marino, California. In addition to the library and art galleries, 120 acres are maintained as botanical gardens for public enjoyment. The grounds includes gardens, galleries, pathways, the Tea Room and Cafe, restrooms, and other points of interest.  The Botanical Gardens are divided into more than a dozen thematic areas on 120 acres and include more than 15,000 different species of plants.

With sixty species and 1,200 cultivars, the Huntington has one of North America’s most comprehensive collections of camellias. Plantings are featured along pathways on both sides of the North Vista and on the slopes of North Canyon, north of the Japanese garden. The beauty of the setting may disguise the function of the gardens as a testing ground for Southern California camellia culture to determine which cultivars thrive best in this locality and under what environmental conditions.

Cultivars of three principal Camellia species invigorate the shady native oak woodland on either side of the North Vista: C. japonica, C. sasanqua, and C. reticulata. Japonicas form handsome shrubs or trees with broad, rounded shiny foliage and single-to-double flowers that are seldom fragrant and range in color from white to red.

Their peak blooming season is January to March. This is historically the most popular type of camellia, with as many as 50,000 named cultivars. ‘Pink Perfection,’ the only camellia found growing on the grounds before 1900, is a formal double type with petals that overlap and contain no stamens. It thrives in the shade of a coast live oak beside the path west of the North Vista. ‘Henry E. Huntington’ is a cultivar developed by Nuccio’s Nurseries of Altadena, California, in honor of the Huntington’s seventy-fifth anniversary in 1994. It’s growing in a bed on the west side of the Library.

Back on the path west of the North Vista, look for Elegans Lane, where a chart explains the process of sporting and shows the lineage of Elegans sports.

Reticulatas produce some of the most spectacular flowers in the genus in shades of pink, scarlet, and sometimes white, peaking February through April. They grow as loosely branched, lanky shrubs or trees, which may reach fifty feet in height. Reticulata Knoll along the west path features descendants of the original plants imported in the mid-1940s from Kunming Botanical Garden in China’s Yunnan Province.

The North Vista frames a view of the San Gabriel Mountains and is flanked on each side by rows of 17th-century statues from Padua, Italy, with an Italian Renaissance stone fountain at the farthest end. Tall columns of “Fountain Palms” (Livistona australis) line each side of the North Vista.

Beyond these lie several acres of camellias. Species Lane is an area dedicated to showing the vast diversity of the genus Camellia, from low growing, horizontally branched Camellia trichoclada to the large leaved, heavily veined Camellia semiserrata. Elegans Lane educates visitors about genetic mutations that give rise to new cultivars or "sports." When this happens, a camellia will have a different flower color or form growing on one branch of the plant. Thirteen new cultivars have been named from the original cultivar, Camellia japonica, ‘Elegans’.

Reticulata Knoll displays cultivars of the species Camellia reticulata. These have an open, rangy growth habit, and the largest flowers of all camellias. Native to the Yunnan Province of China, they were first released to the West in 1948. The Huntington acquired 13-15 of the best cultivar. Camellia reticulatas bloom late in the season, from February to April.

Japonicas are most common, shade loving, and bloom from January to March.