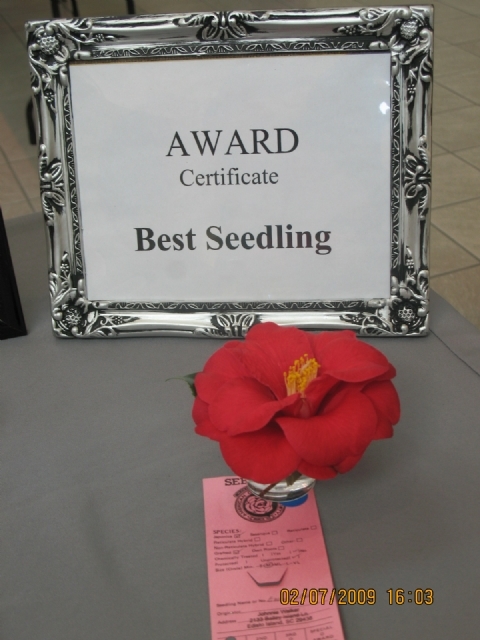 Find out how Tom Nuccio evaluates his seedlings.

Ever since our nursery was established in 1935, we have always had a keen interest in developing new camellia varieties. Through the years, we have often been asked how we judge new camellia seedlings, and what are our criteria for deciding whether or not a seedling should be propagated, named, and introduced to the camellia world. While we do not have a set of hard and fast rules, here are some of the things we look for.

Undoubtedly, the most important feature of a new seedling is the bloom itself. Putting it simply, is it pretty? Certainly, if it is not particularly attractive, why would you want to grow it as a nurseryman, not to mention buy it as a customer? Fortunately, and those of you who have grown seedlings already know this, most camellia seedlings are in fact pretty. Even the simple singles have their own beauty. Unfortunately, however, most seedlings are either ordinary looking or look too much like already existing varieties. This leads us to the next point in considering a new seedling.

Is it different? Does it offer something that other camellias do not? In other words, will it be a welcome addition to the hundreds of camellia varieties already being grown? An obvious and desired difference would be a new color from what is already being produced. Any flower showing strong tones of yellow, blue, or orange, for example, would certainly warrant special consideration as would anything fragrant.

With respect to looking for something different, without a doubt, the most difficult camellias to evaluate are the ones that are the most beautiful and nice, but are look-alikes to already existing varieties. I cannot count the times we have said to ourselves in considering such camellias, “Well, let’s watch it one more year,” only to find ourselves saying the same thing the following year and the following! We have some seedlings that have been dawdling around like this for over twenty years! While they may seem too similar to existing varieties, we simply cannot bring ourselves to discard these otherwise very nice camellias. What generally happens to such seedlings is that we end up propagating a limited number of them, because we have found that we can learn much more about a camellia once we have observed it in quantity. Two good examples of varieties on which we made our final decisions only after propagating them are ‘Firedance” and ‘Tata’.

Initially, we felt that ‘Firedance’ looked too much like ‘Wildfire’ to introduce as a new variety. It remained back in the seedling house for years until, finally, we put in a block of cuttings and observed it in mass. The growth habit proved to be different than that of ‘Wildfire”. It was faster, more open, and stronger. It also had a blooming season that was later, thereby offering the camellia enthusiast the unusual orange red of ‘Wildfire’, but at a different time during the camellia season.

Likewise, ‘Tata’ we felt was too similar to many other large white semi-double camellias, but it was only after propagating a few plants to pass around to family members ( ‘Tata’ is the nickname of one of our aunts ) that we realized what an extraordinary vigorous and good performing beauty we had on our hands.

If a look-alike shows itself to be a major improvement to existing varieties, it may well be worth growing. ‘Alba Plena’ and ‘Purity’, for example are well-established white formal double camellias, but ‘Nuccio’s Gem’ has now replaced both as our number one camellia in that category.

Another feature to consider when evaluating any seedling is growth habit. Vigorous, shrubby and upright is the most desirable growth habit. But a beautiful camellia that is open and rangy is not necessarily without merit as it can nicely be used for espalier or similar garden situations. Likewise, plants that are especially compact or even dwarf in their growth habit certainly have garden value.

Performance is another feature that is very important when judging a new seedling. A seedling that is difficult to open properly, or one that is particularly prone to bud drop, or shy to set buds in the first place is not likely to go anywhere commercially, nor is one that is inconsistent in its performance from year to year.

Time, we find is an essential element to judge a new seedling. It takes time, at least three to five years of blooming, to determine accurately the size and quantity of blooms, the length of bloom, growth habit, and overall performance of a potentially new variety.

Good evaluation of a seedling requires that you have more than one plant to look at. Six to ten propagated plants generally are the minimum to judge a camellia properly. Such variables as disease, over or under watering, rootboundness, factors that can inhibit a plant’s performance and your judgment of it, are minimized when you have more than one or two plants to observe. Basically, to properly judge a new camellia there are no shortcuts.

Finally, I have to say that one of the most enjoyable aspects of growing camellias is growing and evaluating seedlings. To be sure, the majority will be plane and ordinary, but not without beauty. Many will be too much like existing varieties, but few if any, will not be pretty, and the excitement and satisfaction of finding that one outstanding beauty make all the time and effort worth it. If you have never grown camellia seedlings, try it! You’re in for a lot of fun!