There are at least two types of fungal root rots that cause death of camellias, and probably a number of other root diseases affecting camellias that are of lesser importance.  The first and most important root-rot disease discussed is caused by the soil-borne fungus, Phytophthora cinnamomi. Phytophthora (pronounced Fi-tof-tho-rah), means plant destroyer and was first described by Rands in 1922 on cinnamon trees.  This fungus, first found in Sumatra, attacks a wide assortment of plant species, such as Rhododendron, avocado, shortleaf pine, and Fraser fir.

In the early stage of the disease, the camellia declines in vigor. Symptoms may appear as yellowing of foliage, smaller than normal or limp leaves, tip dieback, and delayed flower bud opening or bud drop. In advanced cases, wilting of the plant will lead to extensive dieback and death of the entire plant. Visible symptoms above the ground are aggravated by stressful conditions. Occasionally, plants that appear reasonably healthy will wilt and die in a few days.  This is usually associated with hot, dry, stressful weather. In actuality, the roots continue to decline during cool, wet periods but when warm weather occurs, the root system fails to meet the plant's urgent demand for water and death occurs. Below ground, lesions form on feeder roots at the earliest above ground symptoms. The rot and death of roots starts in the young feeder roots but can progress to older roots, eventually killing the entire root system.  New roots sometimes form and these are also attacked.

The fungus is spread from one area to another by the movement of soil, water, or plants as the fungus survives in the soil and debris in the soil. Container grown plants are very susceptible to this disease. However, many soils are naturally infested with this fungus since it has a wide host range. The disease is much more serious in soils where drainage is poor, since the fungus produces swimming spores that move about in the soil water from root to root.

Control of the disease requires attention to many factors—there is no quick fix to be found. Cultural as well as chemical methods must be used. C. sasanqua and C. oleifera are resistant to the fungus and should be used as rootstock for grafting of C. japonica and C. reticulata varieties.

Proper planting of camellias is helpful. Camellias should never be planted in low areas where drainage is poor since the fungus is most severe in wet soils.  In containers, a well-drained, properly aerated soil mix should be used. Do not reuse mixes or pots which have been infested with the disease causing agent. Plants should not be moved to oversized containers. If large areas of unused mix persist for too long in a container it could become compacted, overly wet, and conducive to root rot.

Diseased stock should be removed from healthy stock to prevent splashing of the disease causing agents. Take care not to purchase plants that have an unhealthy appearance. Some people take the precaution of discarding old soil and replacing with their own potting mix after purchasing new plants. There are also chemicals which, applied as a soil drench, will provide protection against this disease. They can provide control of the fungus but will not eliminate the fungus if applications are ceased. These chemicals, if used in conjunction with good cultural care, can provide adequate control of this disease.

A second root rot problem of camellia, and many other plants, is caused by the fungus Cylindrocladium crotalariae. This fungus forms a tiny survival structure called a microsclerotium which can survive in the soil for at least nine years.  This fungus attacks young cuttings of C. sasanqua and C. oleifera as well as C. japonica and C. hybrids.

The microsclerotia of this fungus may be washed into creeks and rivers. If infested creek sand is used for potting soil and rooting of camellias it can be deadly to seedlings and cuttings of camellia. Symptoms are few; plants just suddenly wilt and die. Roots become infected long before above-ground symptoms become evident.

Control of this disease is accomplished by using sterilized sand free of fungal structures. White builder's sand is free of this fungus. Once camellia plants become well established, this fungus probably does little damage. 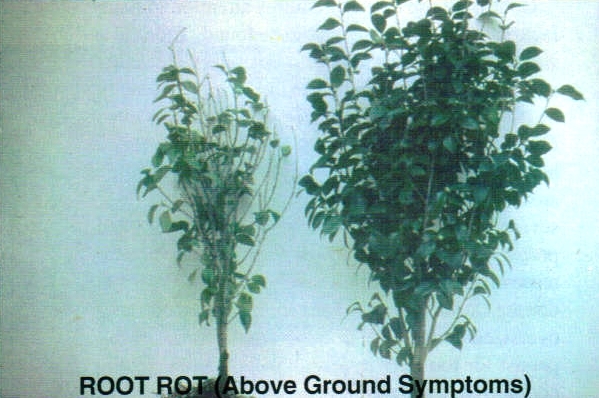