Leafgall of camellia, caused by the fungus Exobasidium, attacks primarily the species Sasanqua.  Most sasanqua varieties may be affected, some more severely than others.  Rarely, this disease has been reported on a few japonica and hybrid varieties of camellia.  Seedlings of C. oleifera have been affected with the disease similarly to C. sasanqua.

The symptoms of the fungus are observed only in the spring on new leaves or new shoots. Symptoms are never observed on second growth that can occur in the summer. Leaves infected with the fungus become swollen and appear very large and thick. They may also be twisted and distorted. Sometimes a white powdery substance is observed on the leaf. It does not cause damage to older leaves and twigs on the plant. This fungus will not spread from camellias to other plants in the yard. Because the symptoms are very obvious they often cause concern, especially among new camellia growers.

Fungicide sprays are usually not recommended. If ignored, the galls will generally dry up in a matter of weeks. They may be pulled or cut off although this will not prevent it from appearing the next year. One serious side effect is that the dieback fungus may enter the plant at the wound left by these galls. 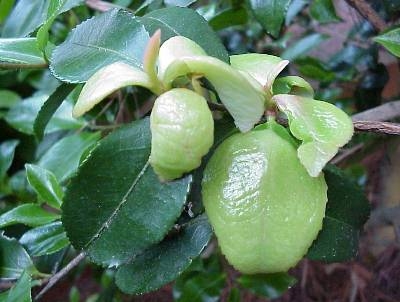