Air layering is a good method of reproducing good-sized plants in one year. It may be done at any time of the year, but the best time is in the spring when the plants are actively growing. At this time the bark is slipping and easily removed. Air layering is based upon the centuries-old propagating process developed by the Chinese of layering (rooting) plants by placing sections of branches that are still attached to the plant in the ground and covering them with earth, having first removed or roughed the bark on the underside.

Air layering is a simple process similar to layering that can be completed in one season. The rooting medium is in the air rather than in the ground. 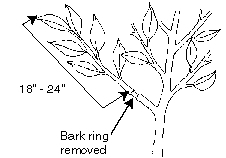